← Teaching the Trinity to Kids Can Christians Be Inclusive? →

Why Did God Make Male and Female? 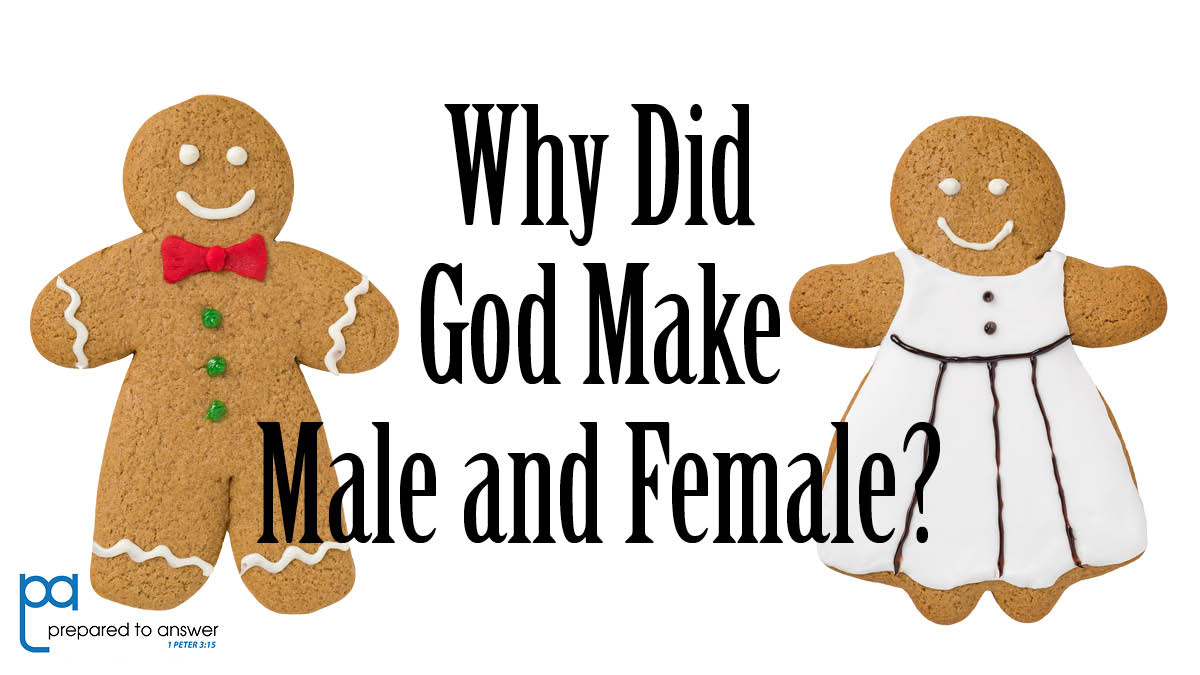 Have you ever wondered why God made male and female? Today more than ever, this is an important question. There is so much cultural pressure to deny or relativize gender distinctions. Wouldn’t you like to have a clear, biblically-based understanding of why God made us as men and women and how it fits in with his eternal purpose? In this short article, I’d like to give you three reasons why God created us male and female.

Genesis tells us God made us male and female to be His image-bearers. That means his decision to give us gendered bodies wasn’t arbitrary. Nor was it just for practical reasons like making babies.  It was necessary so that we could have the capacity to bear his image. That’s why Christians can’t join culture in re-defining gender as a social construct. God has given our gendered-existence eternal significance in three very important ways.

When we say that God is holy, we often think of his moral perfection and righteousness. While this is part of it, God’s holiness refers to how utterly unique he is. The word “holy” in the Bible means ‘set apart,’ ‘make sacred,’ or ‘make distinct.’

Israel sang to the Lord in Exodus 15:11: “Who among the gods is like you, LORD? Who is like you—majestic in holiness.” What they meant was that God is absolutely unlike any other thing in all of Creation. He existed totally and utterly apart from anything or anyone else. That’s why the second commandment is not to make any idol or image to depict or represent God. (cf. Exodus 20:4) Doing so equates God in some way with his Creation. That would be a direct denial of his holiness.

So, God is holy because he is ‘set apart,’ ‘sacred’ or ‘utterly distinct’ from his Creation. It’s no surprise then to see in Genesis 1 how this holy God creates by setting things apart. The chart below shows how God created the entire world by making distinctions. (i.e., separating one thing from another)

And the most significant work of “setting apart / making distinct” that God accomplished in his creating work was making humanity.

The male / female gender distinction is far more than a functional necessity for making children. It is a lasting imprint of God’s holiness, which he intended his Creation to reflect. In this respect, gender is sacred because it is a reflection of God’s holiness.

Our Western culture trains us to think of bearing God’s image only in individualistic terms. But humanity as a whole was created to reflect God’s image, not just individual people. As such, the male / female gender distinction is one of the most significant ways in which humanity reflects God’s nature as Trinity. The diagrams below help to show why.

The doctrine of the Trinity teaches us that God is ONE in his being, but THREE in his person. (Father, Son, and Holy Spirit) In this way, God possesses in his nature both UNITY and DIVERSITY. He is the one God who has existed from all eternity, enjoying eternal and loving fellowship among the three persons of his being. In creating humanity as both male and female, he has likewise given us the capacity for bearing a resemblance to this unity in being and diversity in persons.

Genesis 2:18-25 tells us that God created Eve by taking one of Adam’s ribs. Did you ever wonder why God didn’t just use another clump of dirt the way he did when he made Adam? They still would have been “of the same kind.” But apparently, God was interested in them being something more. Notice what Adam says upon God’s presentation of Eve to him.

The summary statement of vs. 24 reinforces this unity by describing the “one flesh” union of marriage. It’s not that husband and wife become one body. But the closeness created by the sexual union in marriage illustrates the kind of relational love and union existing within the Trinity. Just as God is ONE and THREE, a Man and Woman become ONE and TWO through the marriage union. (When they are also joined together in Christ there is a ‘threeness’ as well, but we’ll leave that for another time.)

In Ephesians 5:25-33, the Apostle Paul writes to husbands, teaching them how they are to love their wives. The model he gives them is Christ’s love for the church. Jesus “gave himself up” for his church because it is his beloved bride, united and bound to him as his own body. Likewise, Paul says that a husband’s wife is a part of his own body. “He who loves his own wife loves himself.” (Eph. 5:28) For biblical support, he then quotes Genesis 2:24, “…and the two will become one flesh.”

His message is clear. The “one-flesh” union of marriage between a husband and wife illustrates the kind of love Christ has for his church. In the unique bond of marriage, Man and Woman are bound so tightly together that you cannot reference the life of one without including the other. If you hurt one, you hurt the other. If you do good to one, you do good to the other. This was God’s intention and purpose. And it wasn’t just to make marriages a stable and robust foundation for human society. According to Paul, it was so we could have, in part, an observable and experiential understanding of the depth of love that God has for his people.

There is a simple reason why Christians can’t conform to society’s attempts to blur the boundaries between the genders. It’s not because we’re bigots or phobic. It’s not because we want to deny people their rights or maintain our traditions. It’s because gender is sacred. It isn’t something manufactured by society and culture. It is an eternally significant work of God intended to reflect and represent his own holy, triune, and loving nature throughout his Creation. We dare not mess with that.

← Teaching the Trinity to Kids Can Christians Be Inclusive? →