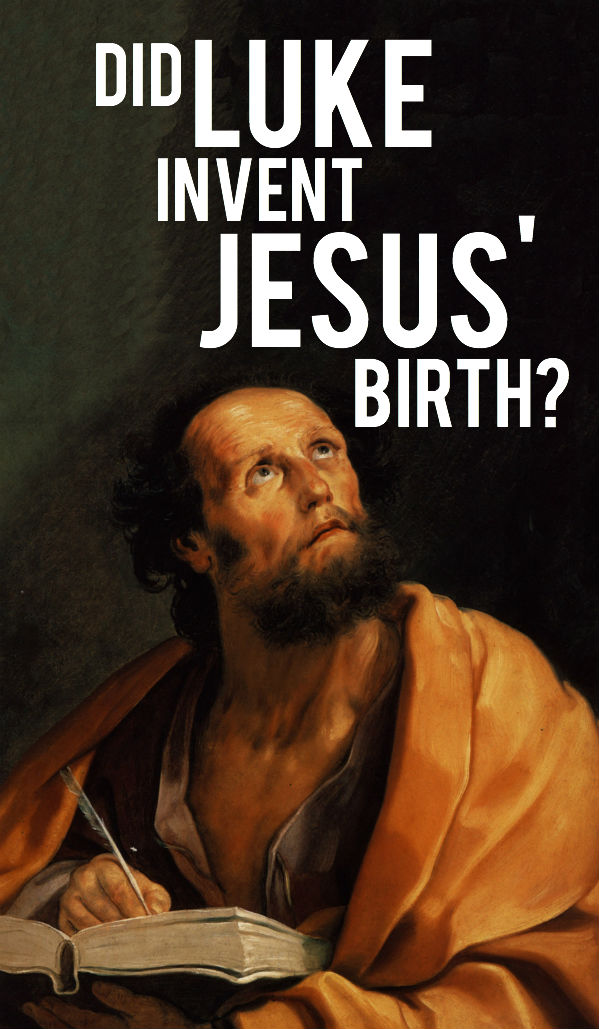 “The story [of Jesus birth] is an invention because there was no empire-wide census and its seems highly unlikely that a Roman official would order people to be counted in cities their ancestors left years before.”
Bob Ripley, Life Beyond Belief, p. 52.

Was Jesus really born in a manger? Did his birth really take place as Matthew and Luke record? The popular skeptical reply is “of course not…everybody knows that!” And so writers like Ripley write Jesus’ birth off as myth, and the popular culture accepts this.

How does the Christian reply? Unfortunately and all too often we simply apply the resolution to continue believing it, no matter what anyone says. But shouldn’t we do better than that? Doesn’t our testimony go beyond just saying “I just believe” to saying “I know this is true”? Well, if Jesus’ birth is a fact of history, then there must necessarily be evidence we can point to to support that fact and counter claims to the contrary. And, there is.

Admittedly, one of the greatest challenges to the historicity of Jesus’ birth is Luke’s deliberate efforts to anchor Jesus nativity in time by using historical markers that would have been familiar to his contemporary audience. Hence, in Luke 2 he writes:

“In those days Caesar Augustus issued a decree that a census should be taken of the entire Roman world. (This was the first census that took place while[a] Quirinius was governor of Syria.) And everyone went to their own town to register. (Luke 2:1-3)

There are three main objections to historicity levelled against Luke by the skeptic.  We can readily respond to each:

1. There was no empire wide census ordered by Caesar Augustus

In fact, there were three. According to Augustus’ own report he instituted empire wide censuses in 28 and 8 BC, and 14 AD. He boasted about this accomplishment during his reign because it appeared to indicate that the Roman Empire was growing.1 The Roman historian Tacitus also bears witness to the writing of Augustus in which he recorded by his own hand the resources of the state, including its number of citizens.2

2. It was not Roman custom to have residents return to their ancestral cities to be registered as Luke reported Joseph to have done.

Actually, we have documented evidence to suggest that it was. A Greek papyrus fragment of a Census Edict for Roman Egypt dated to 104 CE was found in 1905, and is currently housed in the British Museum in London. It states:

“Gaius Vibius Maximus, the Prefect of Egypt, declares:
The census by household having begun, it is essential that all those who are away from their homes be summoned to return to their own hearths so that they may perform the customary business of registration and apply themselves to the cultivation which concerns them.”

Furthermore, we have historical evidence to demonstrate that Rome allowed member provinces to observe local customs in maintaining imperial requirements. In the case of the Jews, Josephus records that the Romans allowed them to maintain tax exemption every seventh year3 and Sabbath observance.4 With respect to a census, as Bock points out, “Jewish culture would require an ancestral registration.”5 There is no historical reason to expect that the Roman census of Judea did not occur as Luke recorded, requiring Joseph to make the trip from Nazareth to Bethlehem.

3. Quirinius was not governor of Syria until A.D. 6-7, too late for the census in Jesus birth narrative.

The historical record shows that Quirinius served as governor of Syria from A.D. 6-7, during which time he instituted a census. The skeptic argues that this shows Luke to be in error since Quirinius’ reign as governor is too late for Jesus’ birth.

This is perhaps the most difficult problem associated with Luke’s account, and yet a number of viable resolutions have been proposed. The first of these is noteworthy because it further corroborates the fact that in every other respect of his writing, Luke acts as a careful historian.

Note specifically what Luke says: “This was the first (gk. ‘protos’) census that took place while Quirinius was governor of Syria”. (Luke 2:2) This Greek word ‘protos’ means “first” or “earlier”. In either case it implies that Luke necessarily had knowledge of “second” or “later” censuses taken under Quirinius; a fact born out in Acts 5:37 where Luke makes reference to the census revolt lead by Judas the Galilean. This same revolt was recorded by Josephus in Antiquities 18:1.16, demonstrating that it was a noteworthy and remembered event among the Jews. It also demonstrates that Luke, being aware of this significant contemporary event, could not have been confusing the census taken during Jesus’ birth with Quirinius’ census of 6-7 A.D. It must have been another census that Luke was referring to.

While Luke is clearly in the know about Quirinius’ 6-7 A.D. census, how can he be referring to an earlier census at a time when Quirinius was not governor of Syria? There are a number of solutions to this difficulty. Admittedly, none of them seems superior to the other. I will note what I see as the top three.

1. The grammar supports reading ‘protos’ to mean “This census was before the census which Quirinius, governor of Syria, made.” This would of course solve the chronology problem, but Dan Wallace7 suggests that such a reading would be a highly unnatural one, and is unlikely to be what Luke meant. While not impossible, it does stretch the grammar.

2. The historical evidence supports the possibility of a census conducted just prior to Herod’s death in 4 B.C. while Varus was governor of Syria.8 Given that such a census and its consequent taxation would have taken time to complete, it is possible that while begun before his reign, this census could have been associated with Quirinius’ name. (i.e. it started under Varus but was completed under Quirinius and therefore he was given the credit).

3. The final suggestion rests upon both Quirinius’ varied and distinguished career, and the notable incompleteness of Roman gubernatorial records. Brindle points out that “Quirinius held high office as the reward of proven ability and hard work.”9 He was a Roman senator; He served as governor of Crete and Cyrene; he was appointed consul and given command of the armies in the war against the Homonadenses (12 BC – 1 AD); he served as advisor to Gaius Caesar in Armenia and served as proconsul of Asia (2-3 AD). None of these rolls make him governor of Syria during the time of Jesus’ birth, but they do put him in a position of high rank in and around the region of Syria during the right time period. Hayles offers the suggestion that Quirinius was not the governor, but was the chosen administrator of the census and held a term as administrator that ran from Saturninus (9 – 7 BC) to Varus (7 – 6 BC).10 Given his rank and proven competence, it is not unimaginable that Quirinius could have given oversight to the census taken during Jesus’ birth, in which case Luke’s ascription is most certainly correct if not technically impeccable.

Others have reasoned at length for similar possible solutions based upon the evidence we have surrounding Quirinius and Roman history. Given the incompleteness of the historical record, each of them are admittedly constructions, but each presents plausible solutions to Luke’s apparent discrepancy. To say we have a definitive answer would be dishonest, but it would be even more dishonest to say that we have enough evidence to conclude that Luke is most certainly wrong. While skeptics can confirm from the historical record that Quirinius was named governor of Syria from 6-7 AD, what they cannot confirm from the evidence is that he was not involved in the census of Jesus’ birth. We can agree therefore with Darryl Bock in saying “it is clear that the relegation of Luke 2:2 to the category of historical error is premature and erroneous.”11

Was Jesus really born in a manger at Bethlehem? Skeptics like Ripley would say: “All we have are Matthew’s and Luke’s words to account for it, so probably not”. And yet in these accounts we have writings that bear the marks of a careful historian recording the facts as, in Luke’s own words, “were handed down to us by those who from the first were eyewitnesses and servants of the word.” (Luke 1:2) This record proves faithful with other historical records in so many places, and while holes in those records do indeed remain, we have no good reason from the evidence to conclude that Luke’s account is anything but reliable.

1. Here are Augustus’ own words recorded in The Deeds of the Divine Augustus, by Augustus, Written 14 A.C.E., (translated by Thomas Bushnell, BSG) [accessed December 15, 2014 online at www.classics.mlt.edu/Augustus/deeds.html]

They raised their hands to the gods, to the statue of Augustus, and to the knees of Tiberius, when he ordered a document to be produced and read. This contained a description of the resources of the State, of the number of citizens and allies under arms, of the fleets, subject kingdoms, provinces, taxes, direct and indirect, necessary expenses and customary bounties. All these details Augustus had written with his own hand, and had added a counsel, that the empire should be confined to its present limits, either from fear or out of jealousy.

NOW Cyrenius, a Roman senator, and one who had gone through other magistracies, and had passed through them till he had been consul, and one who, on other accounts, was of great dignity, came at this time into Syria, with a few others, being sent by Caesar to he a judge of that nation, and to take an account of their substance. Coponius also, a man of the equestrian order, was sent together with him, to have the supreme power over the Jews. Moreover, Cyrenius came himself into Judea, which was now added to the province of Syria, to take an account of their substance, and to dispose of Archelaus’s money; but the Jews, although at the beginning they took the report of a taxation heinously, yet did they leave off any further opposition to it, by the persuasion of Joazar, who was the son of Beethus, and high priest; so they, being over-pesuaded by Joazar’s words, gave an account of their estates, without any dispute about it. Yet was there one Judas, a Gaulonite,** of a city whose name was Gamala, who, taking with him Sadduc, a Pharisee, became zealous to draw them to a revolt, who both said that this taxation was no better than an introduction to slavery, and exhorted the nation to assert their liberty;