← What to Say When Christianity is Blamed for Residential Schools If Science Can’t Prove It, I Can’t Believe It →

How Should Christians React to Deconversions?

by Scott Stein | Culture and Spirituality, Faith and Reason | 1 comment 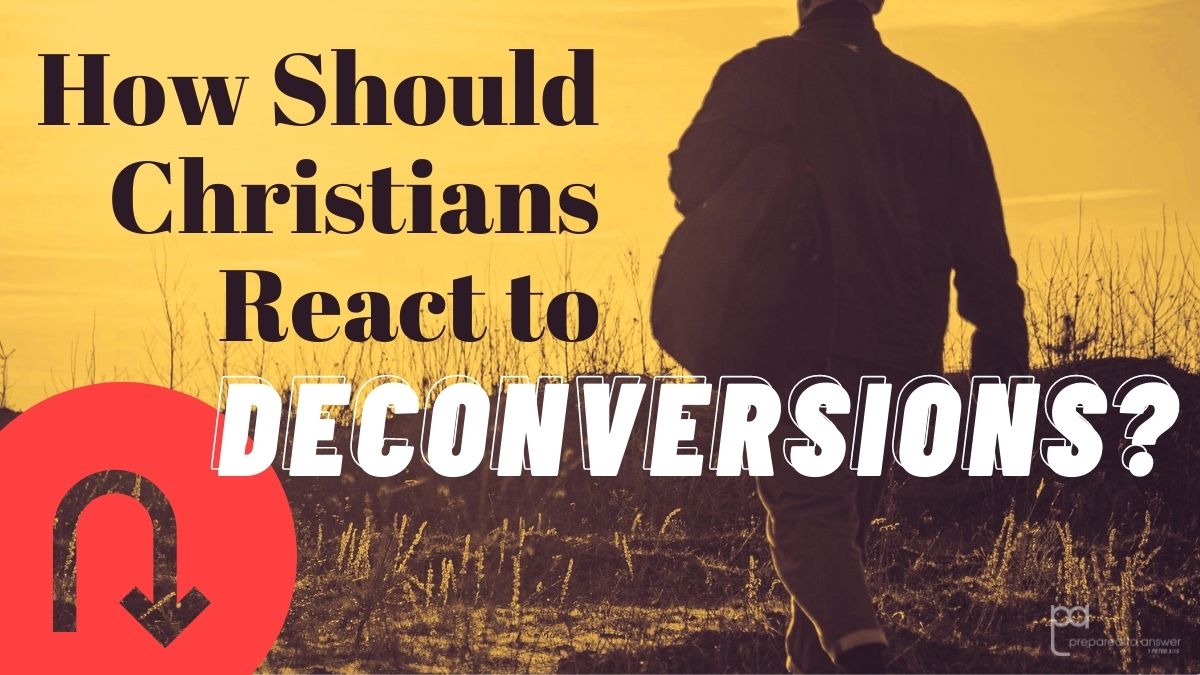 In 2015, Pew Research reported that for every individual who becomes a Christian, four leave. (1)

More recently, there have been many examples of notable Christians–be they musicians, writers, speakers,or pastors–who have publicly announced their de-conversion from Christianity.

Reactions have been mixed. Often emotional. Sometimes harsh. But most of us just feel bewildered, wondering what’s going on and what should be done.

In thinking through the issues around deconversion and our response, there are three things I think are worth considering.

Whether the truly saved can lose their salvation is a theological question with a long history of debate. Wherever you happen to land on the matter, there’s something we can all agree on. The New Testament presents ample evidence of people who at one point were considered followers of Jesus, and then weren’t.

One example was Demas, a close companion to the Apostle Paul. In writing to Timothy, Paul says:

“Do your best to come to me quickly, for Demas, because he loved this world, has deserted me…” (2 Timothy 4:9).

It’s hard to imagine anyone more deserving of the title “Christian” than someone Paul considered a “fellow worker” in gospel ministry. How could someone so clearly identified with the Christian faith turn from it? The only explanation given by Paul is that Demas fell away because he “loved this world.”

The sad truth is that sometimes people who appear strong in their faith fall away. This should grieve and concern us. We should feel burdened over it. But asking whether or not they were truly saved in the first place isn’t really helpful. Jesus makes it so clear on more than one occasion that only those who “stand firm to the end” will be saved. (Matthew 10:22; 24:13; Mark 13:13).

On the bright side, we must remember that there’s still hope for the de-converted. We’re never really told what happened to Demas. Perhaps he slipped away from Christianity, never to return. Or maybe like John-Mark, another of Paul’s companions who apparently deserted Paul (Acts 15:38), Demas was eventually restored into faith and Christian fellowship. God only knows.

But thank God that so long as it’s called “today” (Hebrews 3:13), there’s still opportunity for anyone to turn or return to Christ.

2. Sometimes deconversion is a good thing

C. S. Lewis once wisely said: “If you are on the wrong road, progress means doing an about-turn and walking back to the right road. And in that case the man who turns back soonest is the most progressive man.” (2)

In 2006, the Barna group raised the alarm about a growing exodus from the church among Millennials. (3) Figuring out why has occupied the attention of Christian researchers ever since. One of the findings was the widespread growth, among Millennials, of a “mutant” form of Christian faith which was labelled “moralistic, therapeutic deism” (hereafter MTD). (4)

MTD seems to be comprised of a number of loosely formed, very general beliefs like:

Whether a growing number of churches actually preach MTD as a basic body of belief, or MTD is all people are picking up from their Christian experience isn’t the point. The point is, if someone is devoted to a counterfeit Christianity, then they’re in spiritual bondage. In that case, deconversion is the necessary first step toward finding true faith.

Regrettable, however, is the sour taste toward Christianity left by a negative counterfeit they’ve experienced. This serves as a sober reminder for us, especially those in church leadership positions, to heed Paul’s exhortation to Timothy and “watch your life and doctrine closely” (1 Timothy 4:16).

3. Deconversion may signal a need for God’s refinement

It’s also possible that people are de- converting because many Christian churches aren’t being very Christian. In his book, The Anatomy of Deconversion, John Marriott’s interviews with hundreds of “de-converted” Christians identified both emotional and intellectual reasons for de-converting. Both expose some very unChristian church experiences.

Many former Christians reported deep emotional hurt received from churches or church leaders as the cause for their deconversion. In some cases, it was negative treatment they’d received, or outright rejection from the church. For others it was deep disappointment and disillusionment over things like mistreatment by church leaders or the moral failures of notable, public, Christian figures.

In many other cases, people gave up their faith after unsuccessfully dealing with doubts. They cited wrestling over problems with the Bible, the seeming incompatibility between science and the Bible, and the influence of prominent and vocal atheists whose arguments against Christianity seemed compelling.

Some reported growing up in churches that never allowed exposure to the kinds of questions that eventually lead them away down the road of doubt. They described how expressing doubts in their church was equated with lacking or weak faith. Many felt like they were looked down upon for voicing them. This led to what Marriott cites as “acquired incredulity syndrome”, which is “the inability to continue to believe in the face of growing contrary evidence.” (6)

It’s easy to be critical, and of course interview-based research, while helpful, only tells a very small and one-sided part of the story. However, to the extent that these interviews expose a pattern, this should serve as a wake-up call for all of us who make up Christ’s church. I’m reminded of Jesus’ warning:

Things that cause people to stumble are bound to come, but woe to anyone through whom they come. It would be better for them to be thrown into the sea with a millstone tied around their neck than to cause one of these little ones to stumble. (Luke 17:1-2)

Deconversion stories can be hard and even hurtful to listen to. But if there is any truth to be learned from them then the cost is worth it. Rather than recoil and close our ears, perhaps we need to take some time, like the Jerusalem Council in Acts 15, to make sure we have not set up stumbling blocks which make it difficult for people to follow Jesus.

These are just a few reflections on the deconversion phenomena that we seem to be facing. They highlight the complexities involved and how reluctant we should be to dismissing them out-of- hand as “simply because of ________”. I appreciate those like John Marriott who have taken time to listen closely to deconversion stories. We can learn from them.

But let’s remember that de-conversion isn’t a new problem for the church.

Nor does it require a new solution. In 1Timothy 4, the Apostle Paul writes: “The Spirit clearly says that in later times some will abandon the faith and follow deceiving spirits and things taught by demons.” This may have been a hard truth for young Timothy to hear, but Paul knew he needed to hear it. Like us, he saw people falling away due to false teaching, controversies, corrupt leaders, and other church dysfunctions (see 1 Timothy 1:3, 4, 6-7, 19; 2:9-10; 6:4, 20-21).

Pretty overwhelming stuff for a young leader to deal with. Like many today, those churches required some much needed refinements, for which Paul gave Timothy some specific advice.

But there’s only so much that could be covered in one letter. Since Paul wasn’t sure when he’d see Timothy again, he reminded him of the anchor that, regardless of the specific challenges he faced, he needed to tie his life and ministry to for the sake of the church and the gospel. This is what we need to hear, too. And so in the very middle of the letter, Paul writes:

Beyond all question, the mystery from which true godliness springs is great:

He appeared in the flesh,
Was vindicated by the Spirit, Was seen by angels,
Was preached among the nations, Was believed on in the world, Was taken up in glory. (3:16)

The positioning of this Christ-centered hymn in Paul’s letter is strategic. In chapter 2-3, Paul instructed Timothy on how churches should conduct themselves. In chapter 4 that follows, how to deal with the false teaching that would cause some to “abandon the faith.” (4:1). As it is in our day, so it was in Paul’s.

The basic outline of Paul’s hymn tells us what we most need to know, live, and proclaim. Where Christ’s “appearing in the flesh” and return “up in glory” encapsulate his life, ministry, and reign, Jesus is the focal point of God’s purpose, heaven’s worship, the needed news for the nations, and the truth that saves the world.

1. Maybe you’re wrestling with doubts, fearing a de-constructing of your own faith. Whatever particular misgivings you have, remember that the critical question to ask and answer is the one Jesus posed to his disciples: “Who do you say that I am?” (Matthew 16:15). Until you’ve really wrestled with this question you have not wrestled with Christianity. With whatever faith you have, ask God to help you answer that question above every other.

2. For those of us in the church wondering what to do about this deconversion trend, whatever else we do, Paul seems to be very clear. If we can keep our gaze, worship, living, teaching, and message fixed on Jesus, the rest will fall into place. It’s that simple! But, clearly not always easy.

Two useful resources to further study and understand influences behind deconversion stories and how to overcome them:

Before You Lose Your Faith: Deconstructing Doubt in the Church, ed. Ivan Mesa, (Austin, TX, The Gospel Coalition, 2021)

← What to Say When Christianity is Blamed for Residential Schools If Science Can’t Prove It, I Can’t Believe It →