Wynne’s Sex-Ed Curriculum Wrapped in a Worldview: People Are Starting To Recognize This. 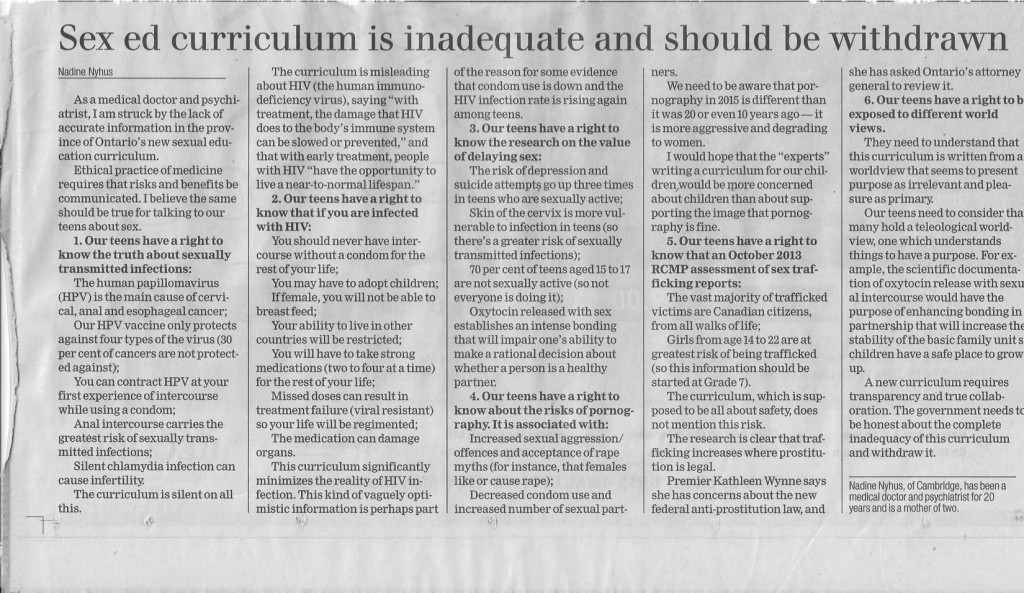 It’s rare to find articles in the media that I agree with on the subject of Ontario’s soon to be released sex-ed curriculum, but I found this one by Dr. Nadine Nyhus in July 8ths Kitchener Record helpful and worthy reading for parents.

Apart from pointing out the medical and emotional risks of sexual activity neglected by the curriculum, Dr. Nyhus makes what I think is the most relevant observation, namely that it favours only one worldview to the exclusion of all others.

“Our teens have a right to be exposed to different world views. They need to understand that this curriculum is written from a worldview that seems to present purpose as irrelevant and pleasure as primary.”

Of course one might quip that the “purpose” of sex IS pleasure, but that is the material point Nyhus makes; that the curriculum does not present any worldview which points to a purpose beyond our own subjective interests. She states:

“Our teens need to consider that many hold a teleological (i.e. pointing to design) worldview, one which understands things have a purpose. For example, the scientific documentation of oxytocin release with sexual intercourse would have the purpose of enhancing bonding in partnership that will increase the stability of the basic family unit so children have a safe place to grow up.”

Of course this would not be covered in the curriculum since all public curriculum is built upon the ‘secular’ assumptions of philosophical naturalism which states that there is no design or purpose in anything. There is no ‘reason’ behind the material universe because there is no ONE behind the material universe. All that exists is time + matter + chance. This is never spelled out in the curriculum, but does provide the ultimate assumptions upon which it is built.

But herein lies the problem that Nyhus identifies. This is hardly a universally shared worldview assumption and appears to be challenged by scientific evidence such as the example cited. I didn’t know that oxytocin was released during sexual intercourse. It seems like this tidbit of medical information might prove useful in educating a student about sex and explaining to them why having sex with a person is so deeply personal and emotional. It also seems logical that the scientifically proven bonding that takes place when you have sex with someone could point to a purpose beyond just a moment of pleasure? Mightn’t this have implications for our attitude regarding sex and our willingness to engage in it? What is the long term impact from abusing this natural bonding process by engaging in causal sex with multiple partners? If we’re talking about sexual health (the stated purpose of the curriculum), wouldn’t these matters warrant discussion?

Bravo Dr. Nyhus for boldly speaking against the majority of media and civic leaders who are applauding this curriculum as a step forward. It has clearly been written to favour one worldview only. As a Christian parent of course my desire is to help my children see this fact, and to grasp the wisdom of letting God inform them in all of life, not the least part of which is their sexuality. I just find it an encouragement from time to time when science and culture, in their more honest moments, point something out that God has already told us so long ago.