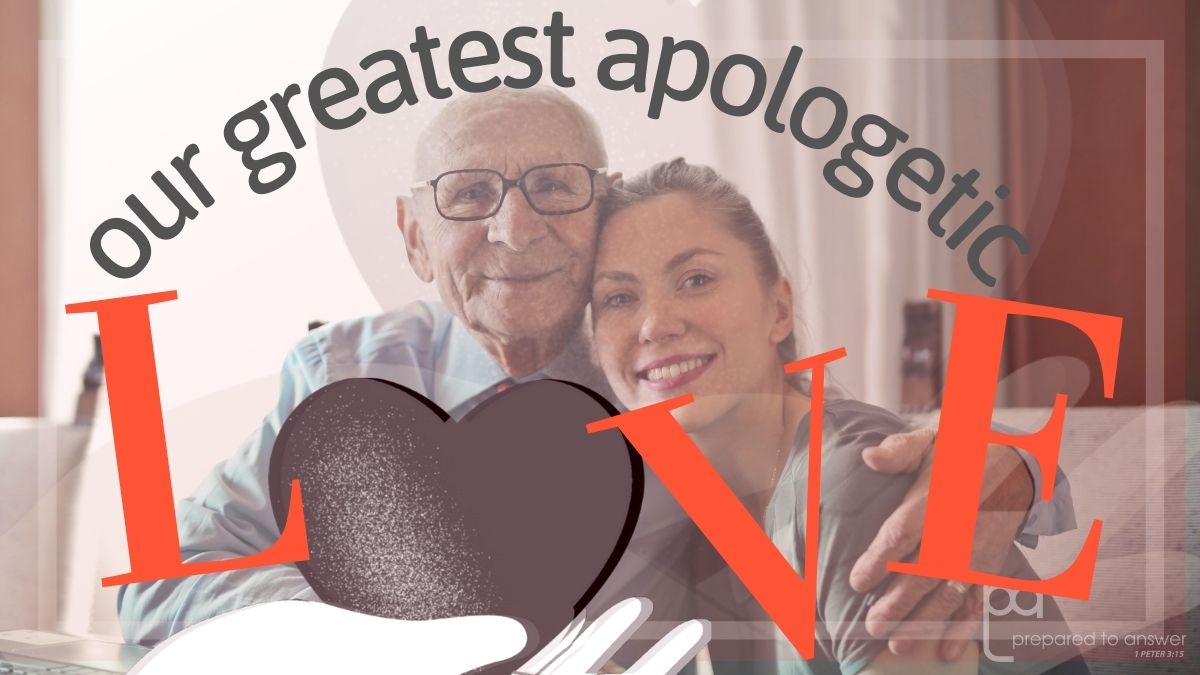 What role does love play in our taking the message of Jesus to the world? How does love relate to our calling as apologists – as those who are to give an answer in defence of the gospel?

Canadian philosopher Marshall McLuhan was made famous for coining the phrase “the medium is the message”. By it he identified the seemingly indivisible relationship in human communications between “messages” (that which is expressed) and “mediums” (that by which messages are expressed). It may have been a novel idea in the 1960s as electronic mass media was emerging, but his notion was passed down long before through the wisdom of God’s Word.

Never was this fact more apparent than in Paul’s first letter to the Corinthians, chapter 13. While it’s popularly read as a text at weddings in modern times, it was to the Christian church that Paul wrote “those sanctified in Christ and called to be holy” (1 Corinthians 1:2). To them Paul wanted to make clear the indivisible relationship between the gospel (the “message”) and the Christian (the “medium”). A passage worth reflecting on for all of Christian living, it deserves our special attention as we consider our role as apologists.

Without love, our words are meaningless

If I speak in the tongues of men and of angels, but have not love, I am only a resounding gong or a clanging cymbal (1 Corinthians 13:1).

Estimates are that the average English speaker has between 15,000-20,000 words in their vocabulary, but only uses 1500-2000 (a mere 10%) of those words in daily communication. One might speculate what better communicators we’d be if we simply broadened our vocabulary.

But even if we had the elocution and erudition of a William F. Buckley (he was really good with words), we’d fail to convey anything of lasting and important Kingdom significance if we didn’t possess love. It’s a simple fact of existence that I can’t produce what’s not in me. Jesus made this point most plain:

In considering our apologetic task, we must acknowledge the inescapable unity between the message and the messenger. If my speech doesn’t flow out of a heart transformed by the love of Christ (i.e. “Christ now lives in me” – Galatians 2:20), then no matter what I say, my words will be meaningless.

By way of illustration, one might imagine encountering a native bedouin in the desert who attempts to describe a Canadian winter. He could have been taught the facts and words to say. But by comparing his speech to his countenance and the non-verbal cues that reveal the truth about his living experience, it would quickly become obvious that he didn’t have a clue what he was talking about. We’d think him foolish to presume to know what he clearly doesn’t.

So, too, does the Christian without love look and sound to a watching world.

Without love, I am meaningless

If I have the gift of prophecy and can fathom all mysteries and all knowledge, and if I have a faith that can move mountains, but have not love, I am nothing (1 Corinthians 13:2).

Our culture is obsessed with significance.  Where thirty years ago TV was populated by a small but universally recognized group of celebrities (i.e. exceptional people whose talents were worth “celebrating”), today the airwaves (and the internet) are filled with a never-ending variety of new, fresh, and entirely forgettable people all vying for their 15 minutes of fame.

But the Christian knows that attempts to grasp the “significances” offered by the world are meaningless – merely “a chasing after wind” (Ecclesiastes 1:14, 17; 2:11, 17, 26; 4:4, 16). And yet it would seem that there’s an equal danger for the Christian who chases after heavenly “significances” in a “worldly” way.

Who hasn’t listened to great Christian preachers or speakers expound the treasures of God’s Word and not longed for that ability themselves? And so even the revealed mysteries of God can become an enticement toward self-promotion. This was the case with Simon the Sorcerer in Acts 8.

And yet Paul gives this halting assessment: Even if I manage to grasp the deep things of Scripture, and gain unparalleled insight into the truth of God revealed in Christ; even if my knowledge, understanding, and even faith lead me to accomplish great and celebrated achievements; even if I become so wise that I can answer every question and silence every skeptic; if I attain to all of them, but not from love, I am nothing. What’s more, I’m nothing to the only measure of significance that even matters. I am nothing to God.

Without love, my greatest efforts amount to nothing

If I give all I possess to the poor and surrender my body to the flames, but have not love, I gain nothing (1 Corinthians 13:3).

Of all people, the Apostle Paul was one who could cite earthly deprivation as the hallmark of his Christian witness. Representing the gospel of Christ to the world had cost him everything from an earthly perspective, not excluding in the end his very life, taken as it was by Roman execution. But to what end? For Paul, in order to gain everything: “I consider them garbage, that I may gain Christ” (Philippians 3:8).

And so it is for the Christian. We store up for ourselves treasures in heaven, so that any loss we incur here on earth in service to Christ, we count as only gain toward attaining our ultimate reward.

Without love, however, I stand to gain nothing no matter how great my sacrifice. How could I gain anything? For without love I will have missed the point of becoming a Christian in the first place.

Christ came to rescue us from sin, which is not a neutral project. We’re rescued from sin to life with God – a life characterized by the love that God possesses within his very being. Jesus the Son of God speaks plainly of this to his Father:

The gospel of Jesus is nothing less than the truth about how God has made a way for sinners to enter into lives of unending relationship with God. It’s a relationship characterized by the eternal love that existed within God’s own being.

In light of this, we face the inescapable fact that without this love made manifest in our lives, we’re incapable of being messengers of the gospel. How could we be? We’re not even what God intends his gospel to make us. And no matter what our service, it will bear no Kingdom benefits, for us or for those we’d presume to share it with.

O Christ let not my efforts be

Devoid of love alive in me

Each motive whole and not in part

Reflecting you within my heart.