← If Science Gives Evidence for a Creator, How Do We Know It's the Christian God? Why Is It So Hard to Live the Christian Life? →

Conspiracy Theories and What to Do About Them 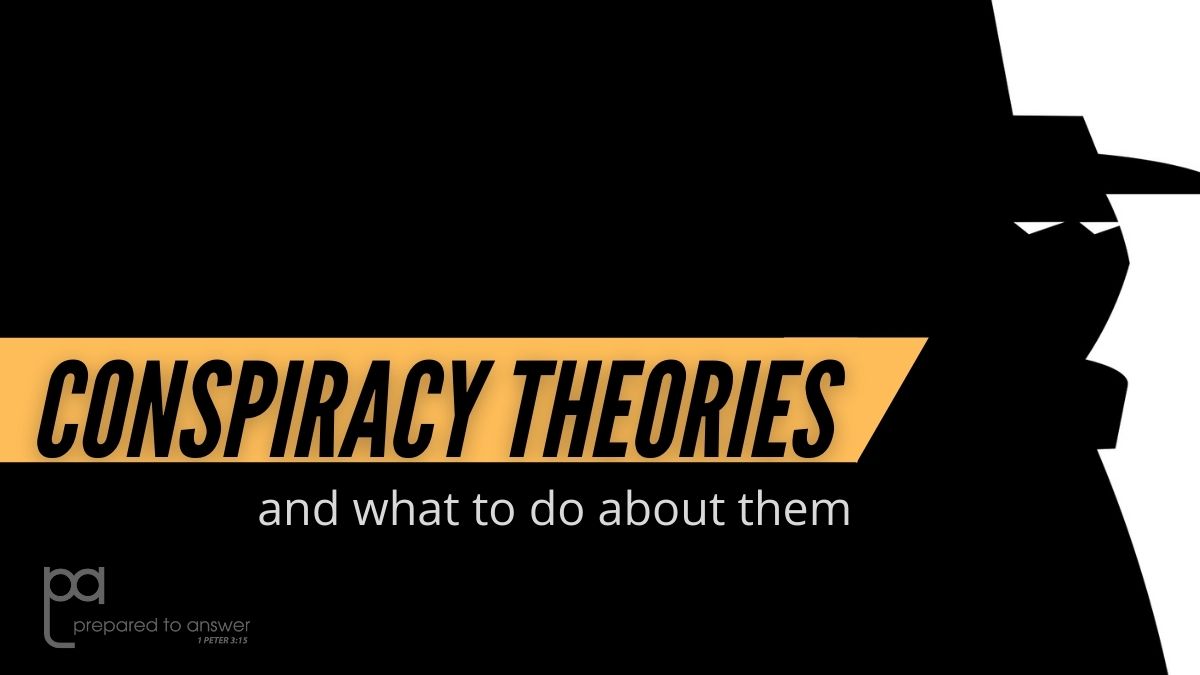 Conspiracy theories are nothing new, even for Christians. One of the earliest disasters visited upon the church was when emperor Nero conspired to blame Christians for the fire that consumed nearly two thirds of Rome in three days.

Conspiracy theories is an important topic, because conspiracies do happen. And, where people in positions of power conspire to abuse that power for immoral ends, good people ought to oppose it.

Discussing conspiracy theories, however, is difficult for a number of reasons.

First, as Joseph Uscinski points out, the term “conspiracy theory” can be weaponized and used to deride ideas and people.[1] This weaponization can in turn immediately provoke defensiveness, making objectivity and interaction between two groups difficult or impossible.

Second, conspiracy theories are often political, and therefore evoke our own biases. Again, to quote Uscinski, “in general, people find it easier to agree with arguments that coincide with how they already view the world.”[2]

Third, conspiracy theories may be true or false, which can complicate how we view or use the term itself.

Given its problematic usage, we should be slow to use the term “conspiracy theory.” But we can’t ignore this topic or the very real and harmful dangers attached to spreading the kind of misinformation that can often accompany conspiracy theories. Failing to do so may result in us being active participants in the sins of slander or sewing discord.

So, how can we do our best to avoid falling prey to or becoming complicit in promoting false conspiracy theories? This isn’t an easy question to answer, since one of the most difficult aspects of conspiracy theories is proving whether they’re true or false. That’s what makes them so contentious in the first place.

There’s a good deal of scientific research verifying how conspiracy theories, whether true or false, can fuel fear and anxiety.[3] Our human frailty craves certainty, predictability and order, which can make the kinds of simple, causal explanations many conspiracy theories supply attractive.

That’s because they help “restore a sense of agency and control,” says Sander van der Linden, a social psychologist at the University of Cambridge.[4] So perhaps even more important than the truth behind conspiracy theories is the truth behind our motives for being drawn to them in the first place.

Remember, Jesus taught that control of our lives is out of our hands. We can neither change the colour of a single hair on our heads, nor extend our lives by a single day (Matthew 5:36; 6:27). But he tells us not to worry about it, because our lives are in God’s hand. Therefore, we needn’t fret over the hairs of our head or anything else because our heavenly Father is in total control.

So, when ingesting the details of this or that world event, check that your motives don’t proceed from anxiety. Remember, worry and anxiety are sins born out of a refusal to place your faith in God alone.

So, before trying to discern the validity, likelihood, or importance of this or that claim and what must be done about it, first ask yourself: “Where does my sense of security come from?”

The fear of the Lord is the beginning of wisdom, and the knowledge of the Holy One is understanding (Proverbs 9:10).

Biblical wisdom refers to practical knowledge that leads to right living before God. This doesn’t imply that we always get things right, but that we live in a manner that honours God even when we get things wrong. As John Piper puts it, “wisdom must include a sensitive, mature judgment, or discernment of how the fear of the Lord should work itself out in all the circumstances not specifically dealt with in the Bible.”[5]

So how does this work when it comes to conspiracy theories and the dangers they present? There’s so much we could say, but here are three things that are particularly relevant.

a)   Weigh the evidence

Proverbs 18:17 tells us that “the first to plead his case seems right, until another comes and examines him.”[6] Our human tendency is to immediately believe a convincing account of events, especially if it happens to confirm or substantiate our own suspicions.

But being wise means taking time to consider all the facts and evidence, as well as any counter arguments which can be made. This’s no guarantee that we’ll get it right. But it will ensure that we haven’t blindly accepted only one side of the story. As Solomon warns, “the naïve believes everything, but the sensible person considers his steps” (Proverbs 14:15).

b)   Don’t jump to conclusions

News cycles have seemingly gone from 24 hours to 24 minutes. In many ways, being first has become more important than being accurate. In weighing the truthfulness of a matter, then, we must avoid the error of jumping to conclusions and heed God’s wisdom when he says, “everyone must be quick hear, slow to speak, and slow to become angry” (James 1:19).

This really speaks to avoiding rashness. The danger of being rash isn’t just the risk of our being led into sin, but of leading others along with us. Sometimes biblical wisdom simply means “counting to 10” before airing our opinions or forwarding a Facebook post. Hastily weighing in on a matter may implicate you in spreading misinformation, if you haven’t taken the time to hear all the facts (not opinions).

c)   Always be wary of pride

Proverbs 21:2 says, “every person’s way is right in his own eyes, but the LORD examines the heart.”

Pride wants to be seen as right or on the right side. It tempts us to uncritically favour our own views and demonize those who oppose them. It can also tempt us to only seek out lines of argument or evidence from sources that we know already favour our view.

The antidote to pride is humility. It’s not that being humble automatically means we get it right. But it does mean we’ll respond rightly even when we get things wrong. It also means that we’re willing to admit we could be wrong, which further helps in observing points a) and b).

Most of all, humility acknowledges that God and God alone controls world affairs. This means that our most constant and passionate reaction to the important matters being raised by this or that conspiracy claim is prayer. Which leads us to our final point.

The truth is that sometimes people succeed with evil plans. This doesn’t excuse us to sit idly by and do nothing when it’s in our power to act. However, it does mean that despite our best efforts, sometimes the wicked prosper (Psalm 73:2-4).

It’s important, therefore, that we keep a clear and biblical perspective on what’s really going on in the world.

In Isaiah’s day, the people of Judah faced the same kind of worries that we do. Their peace and security were being threatened by powerful forces out of their control as the Kings of Syria and the Northern Kingdom of Israel conspired together and laid siege to Jerusalem.

The Jews in that city had to wonder, was this a sign that the winds of power had shifted? Should they switch alliances from Assyria to this Syria-Israel coalition? Which side’s political motives best represented their interests? Who would come out on top? Whose plans would succeed?

God sent Isaiah to speak into their paranoia. What they needed was a clearer view of God, not more theorizing together in the town squares and Temple courts (the ancient world equivalent of Facebook) about what was really going on, who was really in control, and what was really the solution.

What they most needed reminding of was that the armies outside their walls and the plans they’d made were inconsequential to the unfolding and fulfillment of God’s eternal purposes. Their God was the Lord of armies. Nations submit to his will. Earthly rulers are but “flies” and “bees” that God whistles for to carry out his purpose (see Isaiah 7:18). They can plan and scheme and plot all they want. But nothing comes to pass unless God wills it. For as the Lord says later in Isaiah 46,

For I am God, and there is no other;
I am God, and there is no one like Me,
Declaring the end from the beginning,
And from ancient times things which have not been done,
Saying, “My plan will be established,
And I will accomplish all My good pleasure”;
Calling a bird of prey from the east,
The man of My purpose from a distant country.
Truly I have spoken; truly I will bring it to pass.
I have planned it, I will certainly do it.

It’s getting harder and harder to know what to believe from the public news cycles anymore. The political unrest and polarization we’re experiencing in the West shows no sign of improving anytime soon. Accusations of hidden agendas and conspiracies may multiply. Knowing what’s true and which causes to support will become more challenging.

Christians must therefore work hard to be people of the truth, since we follow the one who is the Truth. To that end, the place to begin is with ourselves.

Keep testing your motives before the Lord to make sure fear and anxiety are not driving your consumption of daily news. Be deliberate in learning to practice biblical wisdom, which begins with revering God above all else. And always remember that our God is a sovereign God. This means that every man-made plan will ultimately fail, but every purpose of our loving heavenly Father will succeed. So, what have we to fear?

[4] Jillian Kramer, “Why people latch on to conspiracy theories, according to science”, National Geographic, Jan 8, 2021. [accessed online, Jan 11, 2021 at www.nationalgeographic.com]

[6] Also instructive is Proverbs 14:15. “the naïve believes everything, but the sensible person considers his steps”.

← If Science Gives Evidence for a Creator, How Do We Know It's the Christian God? Why Is It So Hard to Live the Christian Life? →