← All Religions Lead to God!...What Do You Say? When Sharing the Gospel, Never Forget This! →

Can Christians Be Lucky? 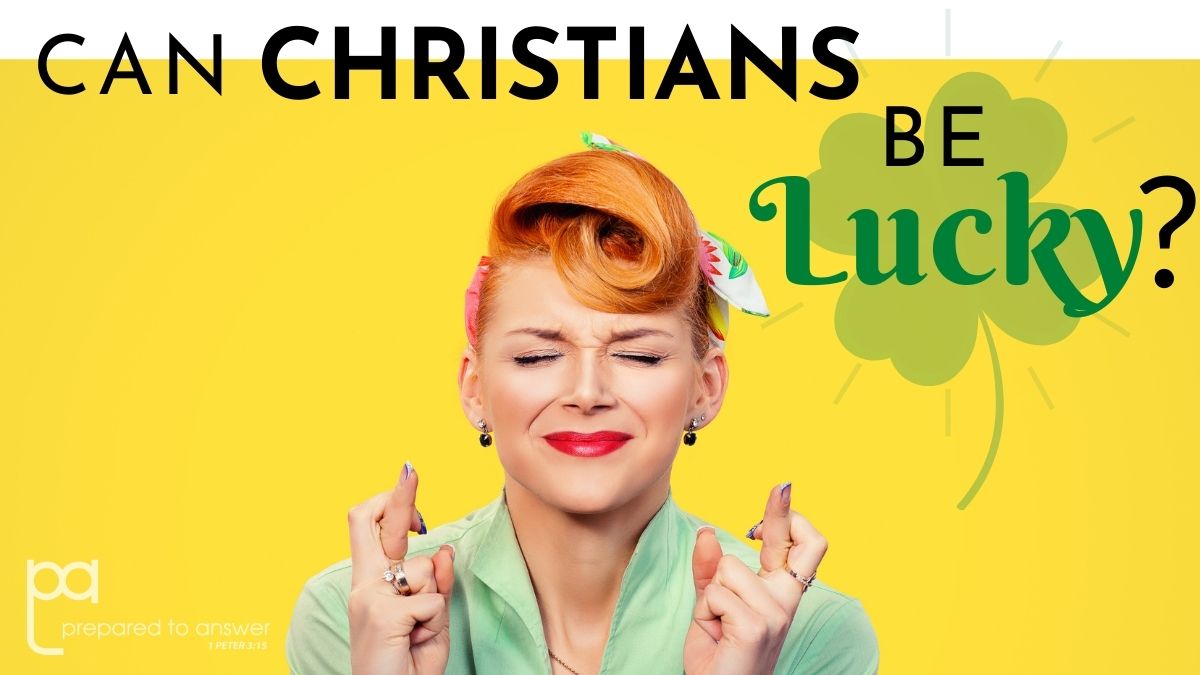 A Christian parent shared how during a family outing their child declared what “good luck” they’d had to have enjoyed such perfect weather.

What their child said got the parent thinking about how often people use words like “luck” or “karma” to refer to good fortune or coincidence.

Is “luck” a subject the Bible addresses? Is it even something we need to think about?

After all, isn’t the word “luck” just something we hear thrown around all the time— though maybe more so certain times of the year, such as on St. Patrick’s Day (alongside “leprechauns”)?

How should parents understand “luck” and talk about this concept with their kids?

On one hand, saying “that was lucky” or “good luck” isn’t a big deal. They’re just expressions or figures of speech. Seldom is anyone consciously considering any hidden significance.

On the other hand, words do have meaning and do reflect the way that we view the world. In this case, it’s worth considering that belief in luck traces its roots to pagan beliefs and the occult.

What is the occult?

The occult refers to any practice associated with the paranormal, such as “efforts to access or use supernatural power or attempts to gain secret or hidden information outside the use of the natural senses.” 1

In occult thought (such as divination or witchcraft), good or bad things happen when we tap into supernatural powers that work outside the boundaries of natural laws or senses.

“Step on a crack, break your mother’s back,” we’d joke as kids. It seemed silly because what possible connection is there between stepping on a sidewalk crack and fracturing your mother’s spine?

However, in occult thinking, if an action is sufficiently tuned to the supernatural realm, a connection could be made.

Some Christians may be tempted to think that words like “luck” are just non-Christians’ way of describing what Christians see as God’s power at work in the world.

There is a very clear reason why this isn’t the case.

At the root of all occult belief is the denial of distinction between the Creator and the Creation. It sees the physical world as a lower or corrupted part of the divine. Divine power, therefore, is united to the universe and can be harnessed or manipulated by those with the hidden or secret knowledge needed to do so.

This belief in the divine nature of the universe is clearly identified by the apostle Paul in Romans 1:25:

They exchanged the truth about God for a lie, and worshiped and served created things rather than the Creator—who is forever praised. Amen.

Can we have control over God’s power?

The clear teaching of the Bible is that God and his creation are utterly distinct. The universe is not a part of God’s mind or body or being in any way.

Yes, he’s a personal God who relates to his creation.

But he exists in and of himself. He doesn’t depend upon or need his creation for anything. And God only ever exerts his power according to his own eternal will.2

As part of the creation, therefore, human beings are incapable of manipulating or controlling God.

Rather, we relate to him through our love and obedience to his Son Jesus, as he relates to us in love as his adopted children.

The differences between beliefs about “luck” and God could not be greater.

Should “luck” become a taboo word for Christians?

Opinions may differ here. I tend to lean on Solomon’s wisdom in advising:

Do not be overrighteous, neither be overwise; why destroy yourself? (Ecclesiastes 7:16)

This isn’t Solomon’s prescription for a “little bit of sin” for good measure.  Rather, it’s a warning against falling into the trap of hyper-legalism to gain God’s approval.

Enforcing a taboo list of words carries the danger of promoting self-righteous pride; something we should be wary of also.

If your child says “lucky” when she hears about her friend getting a new dog, view it for what it is; her wish for a dog of her own. You may disagree, and that’s fine.

Ultimately, this boils down to a matter for conscience.

When should Christians be concerned about luck?

Where we ought to take notice and show concern, especially with children, is when we see superstitious or modified behaviours due to irrational fear of repercussions.

These could include things like carrying lucky objects or doing/avoiding things in order to bring about an effect where no natural cause-effect relationship exists. (Think hockey players refusing to shave until playoffs are over. Growing a beard has no causal relationship with playing hockey well).

This is a clear warning that there are beliefs in powers at work which need to be appeased for protection or good fortune. Marcia Montenegro warns:

If you were to examine the origins of most superstitions about luck, such as knocking on wood, carrying a rabbit’s foot or lucky penny, hanging a horseshoe over the doorway, or others, you would find that these concepts were based on beliefs in appeasing gods, powers, or chance; attracting supernatural powers for protection against evil; or some other superstitious view of attracting good fortune.  Luck and so-called lucky objects have nothing to do with relying on God.3

Teaching children to think like Jesus about luck and being lucky

Through media and culture, our children are continually bombarded by beliefs and messages which ultimately come from Satan. His goal is to destroy their trust in God and rob them of the gift of peace that comes from being His child through faith in Jesus.

If your child begins displaying “luck” conscious behaviour, help them to see that what they’re really doing is saying that they don’t trust God.

What they need to counteract the false idea of luck is the sound instruction and encouragement from the Bible, which teaches that the only true power to protect and keep them safe comes from their heavenly Father who loves them.

As you teach your child to think about luck like Jesus does, here are a few good scriptures to have on hand for such occasions:

Verses from the Old Testament

Verses from the New Testament:

You may feel that this issue of Christians using “luck” and “good luck” language is no big deal. And if so that’s fine. But before you settle the matter, consider this. Our words reveal to the world the thoughts that reside in our minds.

What then does “luck” language say about how you see the world? What does it say about how you view God’s hand in day to day events? In your own mind, does it bring God closer to the mundane moments of your daily walk, or push him further away?

In considering these things we’ll leave off with the words of the Apostle Paul reminder in 1 Corinthians 10:5:

We are destroying speculations and every lofty thing raised up against the knowledge of God, and we are taking every thought captive to the obedience of Christ

← All Religions Lead to God!...What Do You Say? When Sharing the Gospel, Never Forget This! →